Department of Architecture and Urbanism 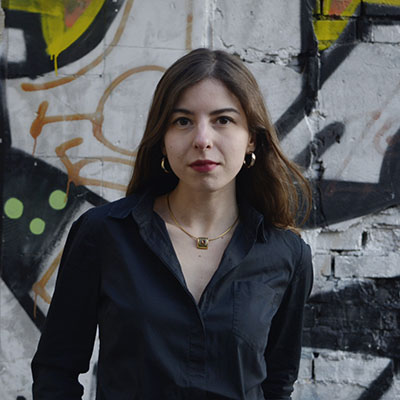 Master degree in architecture at the Technical University of Berlin, scholarship holder of the Heinrich Böll Foundation, member of the Association of Architects (Architektenkammer) of Berlin. For about 4 years, she worked in the architectural office Kleihues+Kleihues where she designed commercial and cultural buildings of various scales through all project stages. There she also worked as a project leader for competition projects, many of which had won prizes at international competitions, including the urban planning project for the revitalization of the industrial area Siemensstadt 2.0 in Berlin (second prize). This area of ​​the city was also studied by Anna in her thesis where she researched the possibilities of changing land use and ownership models for the sites of former infrastructure objects on the example of the Siemensbahn city train line. As a part of her thesis she also designed proposals of experimental building types of various uses.

After obtaining a Bachelor degree in architecture at Kharkiv National University of Construction and Architecture, she did her internship at Format Elf architectural studio in Germany, later worked as an architect at Drozdov and Partners. During this time she also participated in creating educational projects at NGO Urban Forms Center, among others the international conference Gender Issues in Art, Architecture and Urban Planning and the awareness-rising project “Modernists” about women’s contribution to sciences, culture and art. She participated in Ukrainian and international summer schools devoted to various topics in urban studies. Anna continued her activity in the public sector in Berlin cooperating with the Kyiv Dialogue organization as a lecturer at forums for communities of Ukrainian urban activists implementing participatory projects.

Currently, she is designing and teaching a course on architectural typologies within the framework of the Bachelor’s program at KhSA. Her academic interests lie in the field of Theory of Architecture with a focus on architectural and urban typology. Anna is also curating and organizing the school’s public program which is currently focused on exploring the new role of an architect in the context of modern day Ukraine and its post-war development.

fill your data to receive the information

To become a donor

Information about our events and actual news from KhSA